Wedding photography is about a lot more than getting a great shot of the bride and groom. Of course there are plenty of family shots and special moments that need to be captured, but there are also a lot of details that you don't want to forget. And a lot of time goes into those details - the wedding favours, the bows, the decorations, and even the lighting.

One of the relative constants is the cake. Although it often comes in smaller bite sized pieces (cupcakes) these days, there is always some kind of sweet confection to be had, and the style of that tasty shared experience is just as much an expression of the bride's taste (pun intended) as the dress or the venue she picked.

Just for fun, I am posting a few of the cakes from weddings I have been privileged to photograph. I hope you enjoy them, whether they inspire you, or just make you hungry. 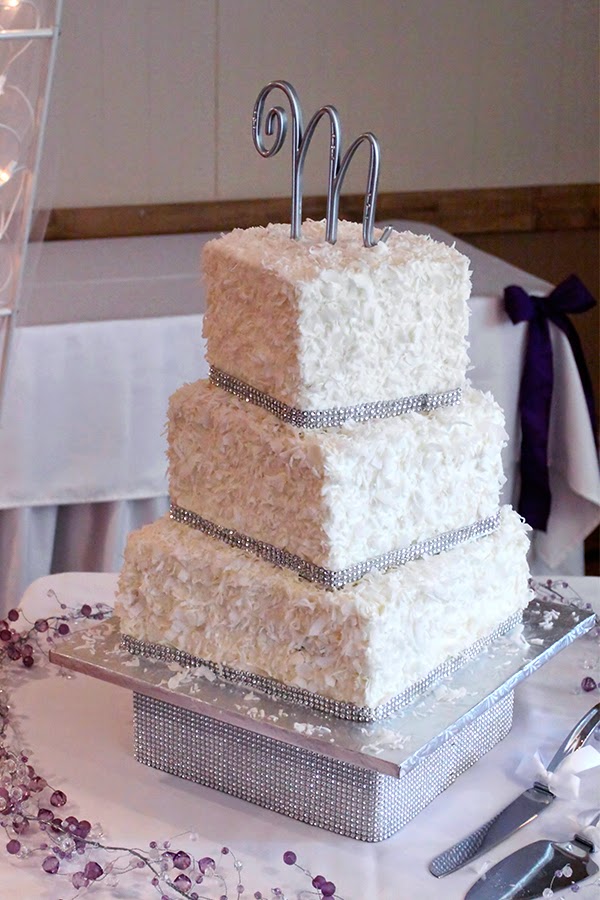 Some cakes may appear plain at first sight, like this simple box type triple layered cake. But they still express the bride's likes - this one was sprinkled with coconut. 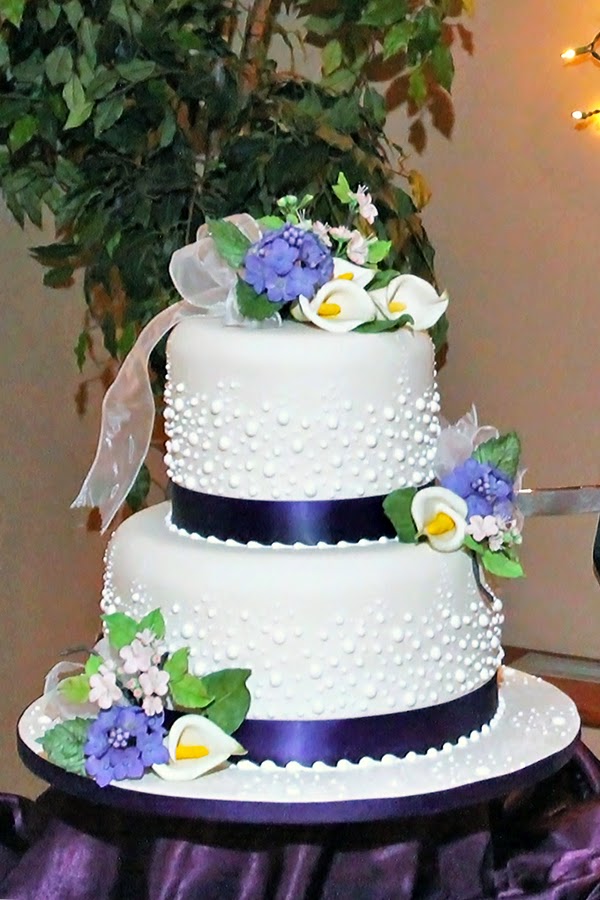 Often the flowers on a cake will match the bride's bouquet - except on the cake, the flowers are usually edible... I think I prefer those kind, although it would get very sticky to carry those down the aisle. 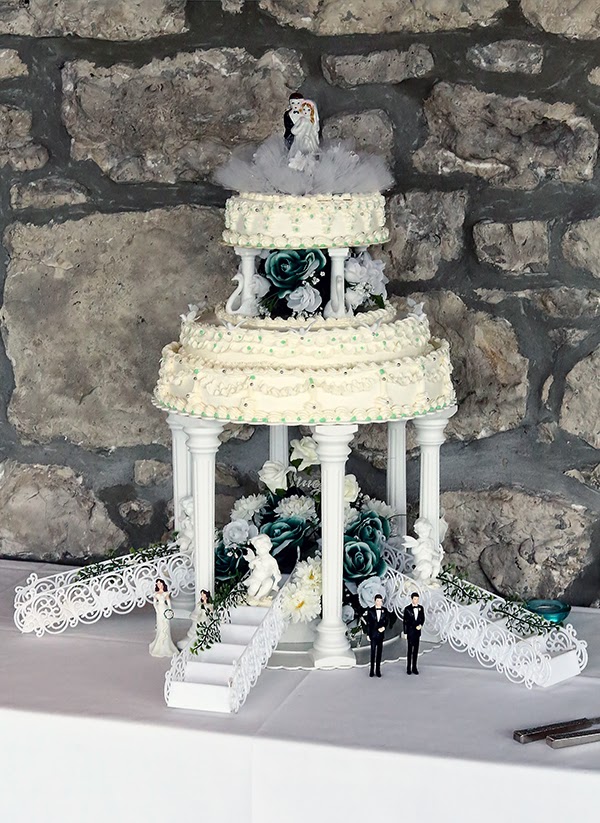 Some cakes are elaborately decorated and express an old-world style, perhaps expressing the bride or groom's heritage as well as their own personality. Sometimes the family member paying for the cake may decide what it should look like. This very nice two tiered cake on pillars appeared to be styled like a gazebo with the bride and groom on the top and the wedding party around the base. 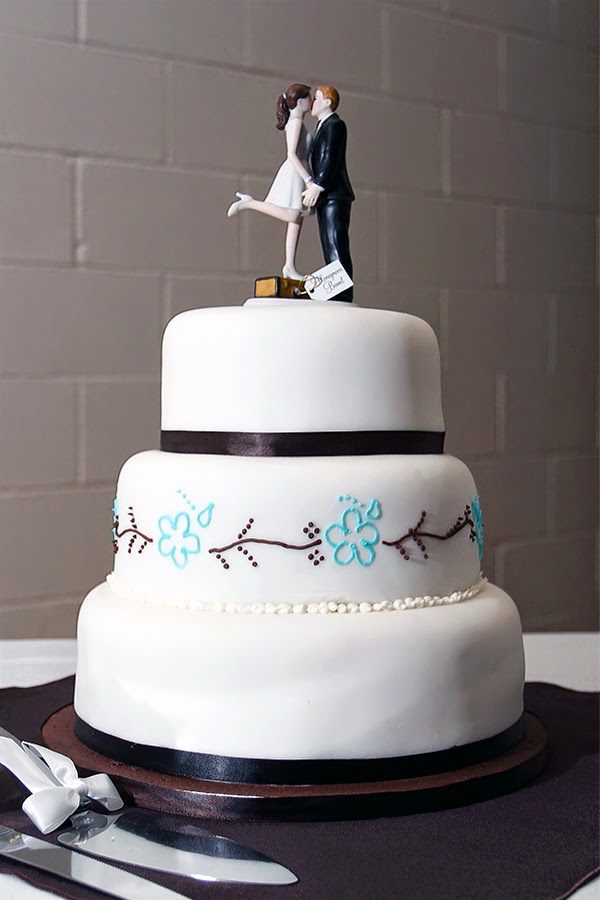 Like the flowers, the colours are, of course, also a big part of the wedding and the cake reflects the pallet chosen by the bride. Details usually match those found elsewhere.

This cake also brings us to the topic of cake toppers - in this case the bride and groom getting ready to leave on their honeymoon. A nice twist on the usually simple bride and groom. 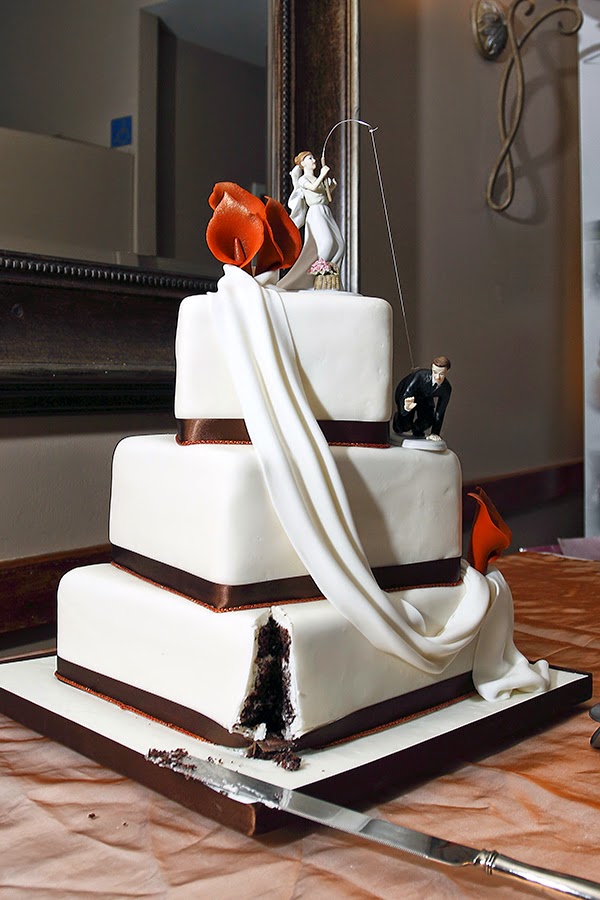 And of course, the cake topper can also express who the bride and groom really are. I'm not certain whether this one spoke to how the groom came to be at the wedding, or what the relationship was going to be like in the years to come, but either way it was a fun addition to the celebration. 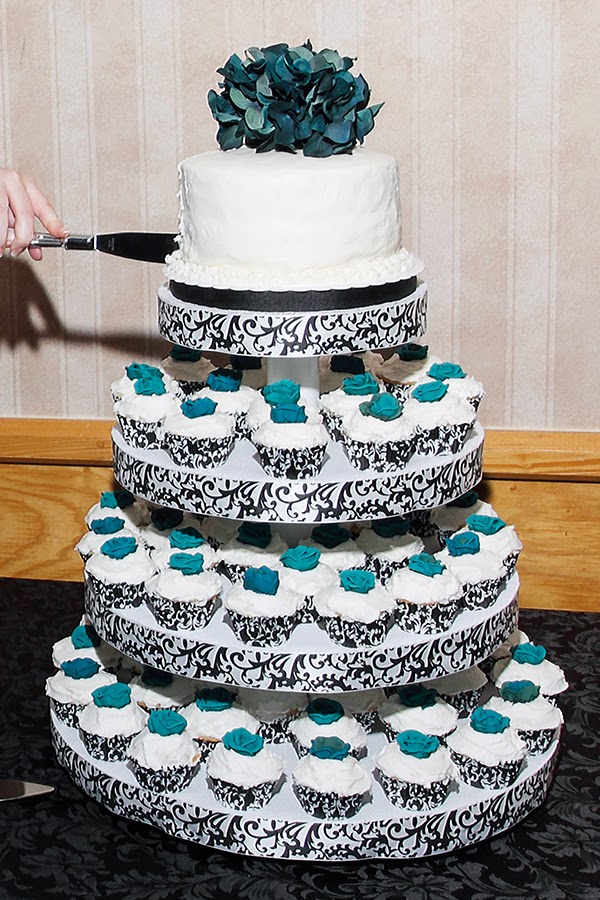 These days, many brides opt for the cupcake - cake. Cupcakes are much easier to distribute, or guests can simply come and take one with them. In this case, the top layer was a fully decorated cake so it could be cut during the reception. What a great idea! 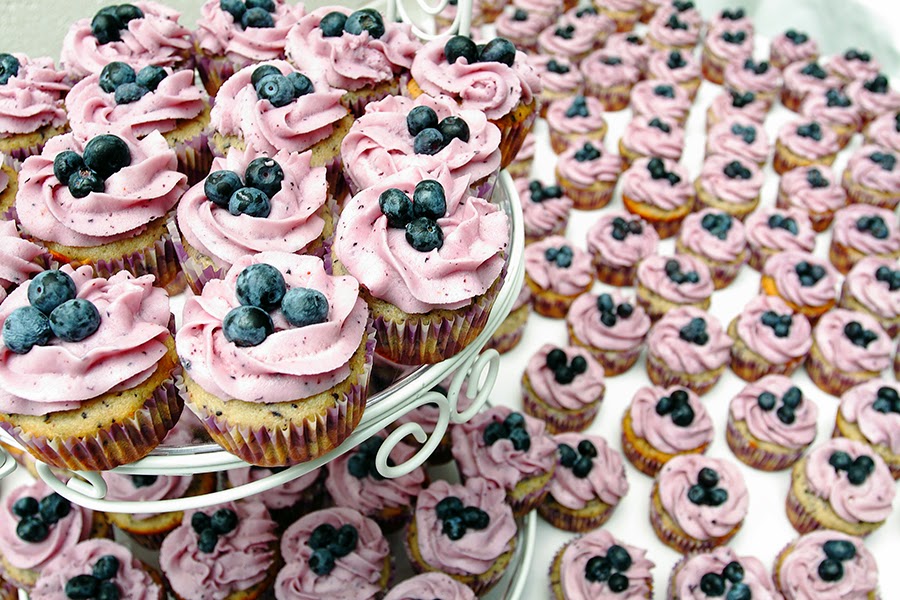 If there are a lot of guests, however, the cupcakes can seem to go on forever. Imagine taking the time to bake all of those cupcakes. It almost makes those big fancy cakes look like an easy task. 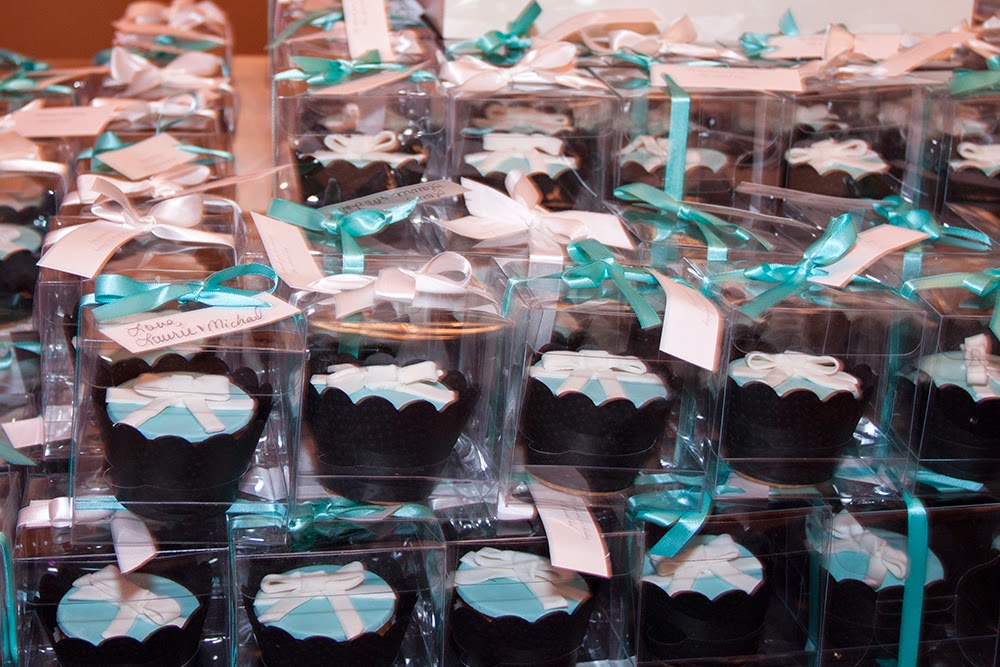 And if you really have lots of time, or lots of help, you can even package each one up in it's own box for each guest. This mound of cupcakes looked very pretty all tied up in blue bows and stacked in a pyramid on the table. Just don't take one from the bottom please. 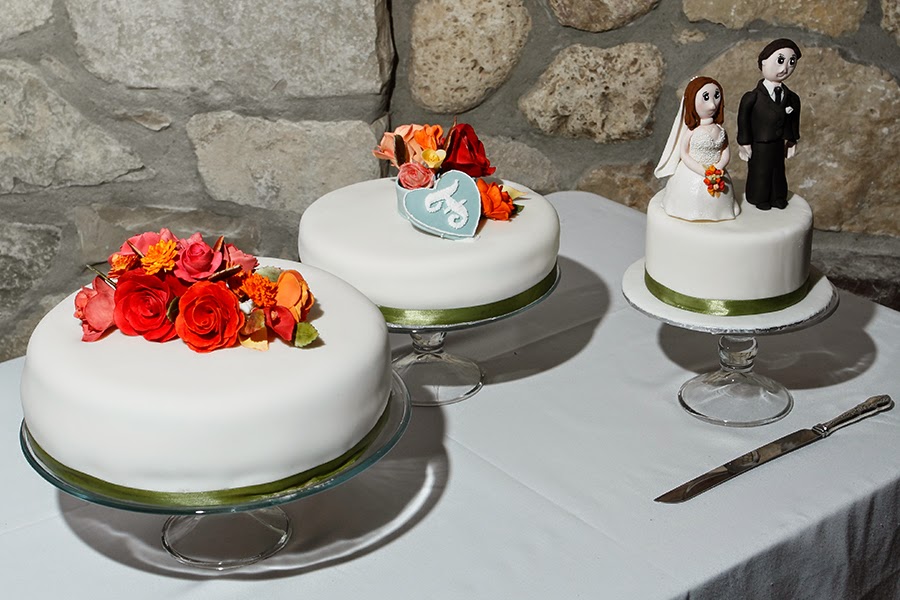 Another trend in cakes at weddings seems to be that the bride's mother takes a course on making wedding cakes and bakes the cake for the bride. Sometimes these cakes turn out absolutely fantastic, and they have all the more meaning because of the personal touch creating them. In this case, even the bride and groom were made from fondant by the mother of the bride. 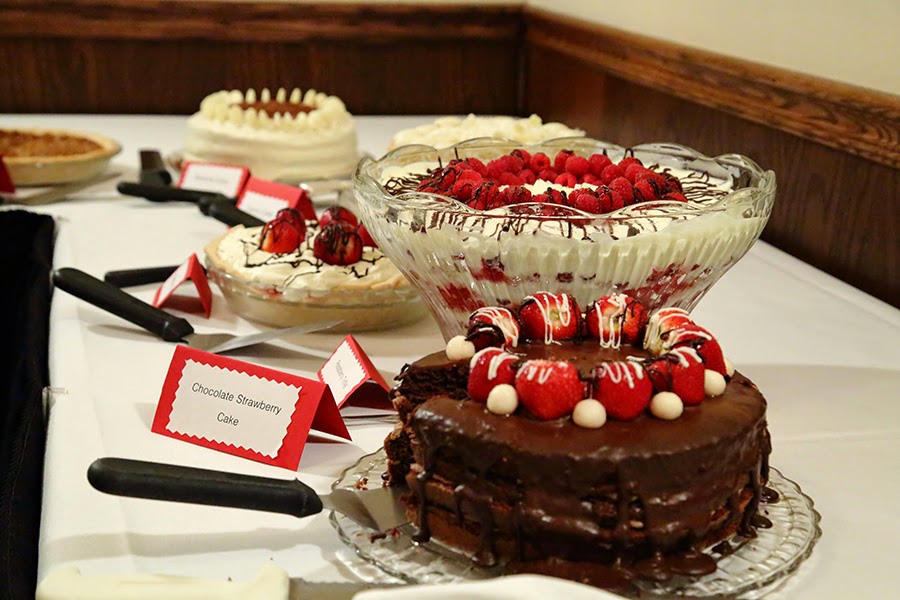 Maybe the cake is a little too cliche for your wedding, but you definitely like your deserts. In the photo above, the bride and groom chose to have a desert table instead of a wedding cake (though they had at least one cake that they could "cut"). It was really hard to choose which one to have a taste of though - I imagine many people had more than one. 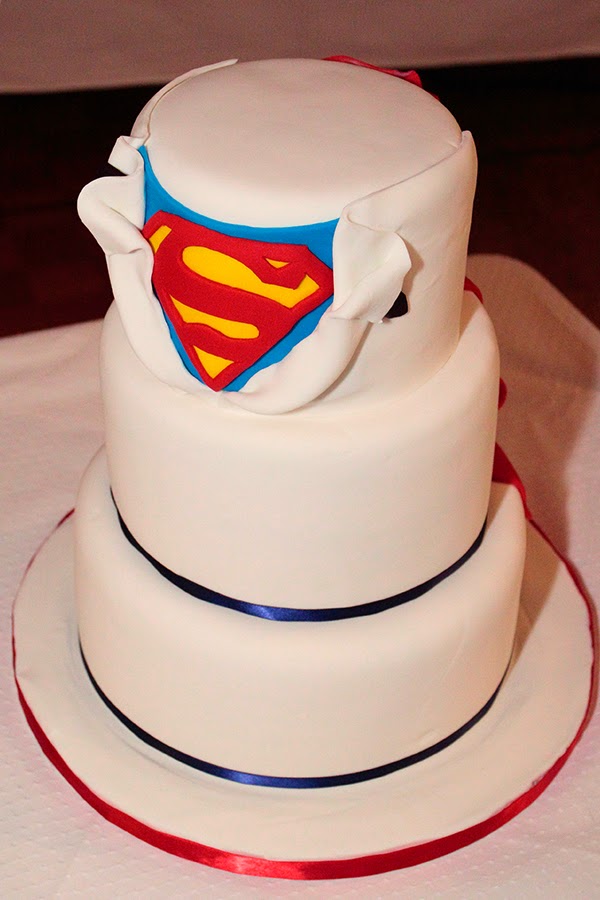 Getting a little more thematic is also a fun thing to do. The groom and groomsmen each had a T-shirt on under their tux with a different superhero - the groom of course was superman. The table favours were also themed after comics and superheros. So it was only natural that the cake would also express this theme... pretty awesome. 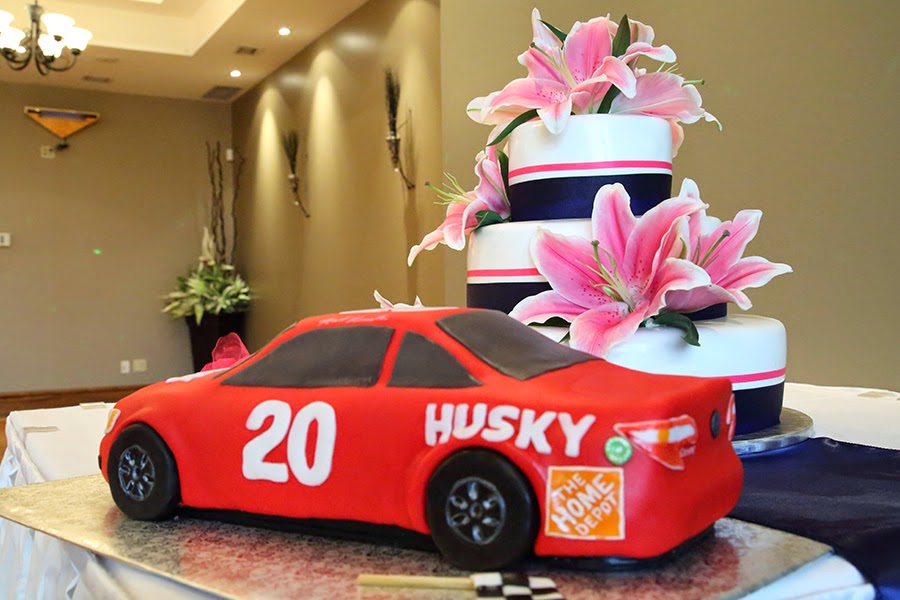 And of course, why should the bride have all the fun? What self-respecting groom would pick big pink flowers if they had a choice - it looks great, but it's a little girly... so why not a Nascar cake? Yep, this couple had both a bride and a groom cake - take a guess which one is the groom's cake.

Details, details. Just another thing to capture in your wedding photographs. Doesn't it just make your mouth water and your sugar receptors crave the sweet stuff?

I wonder if there is still some Easter chocolate left in the house somewhere... 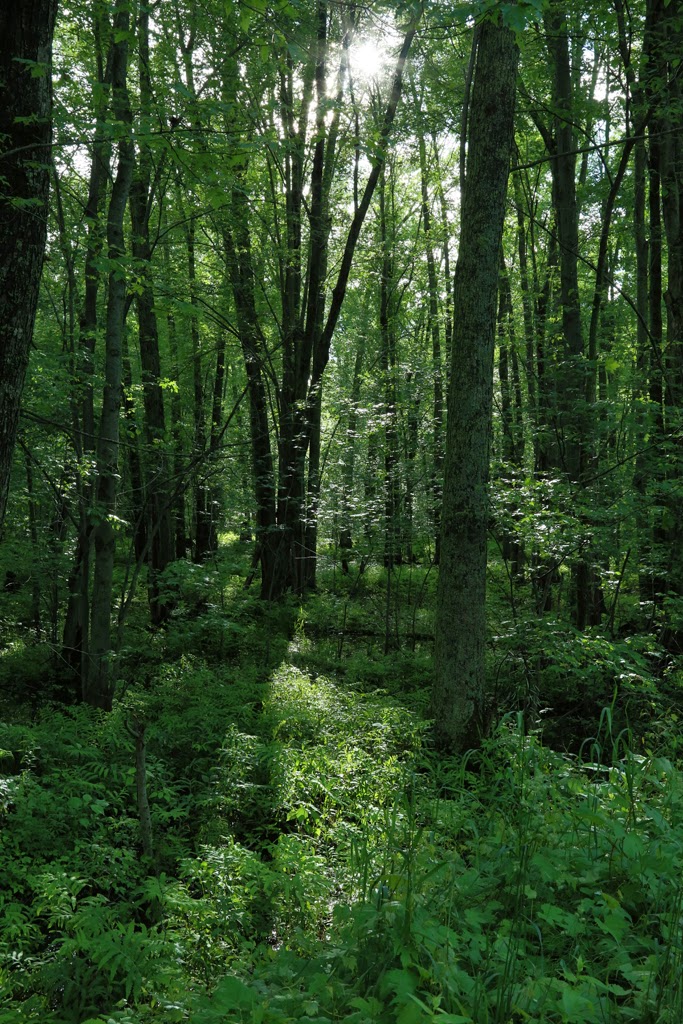 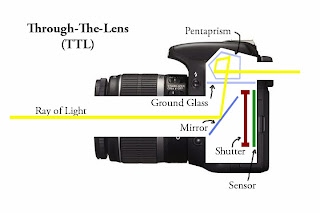